If one looks at the contemporary continental European art scene, blues, jazz, hip hop, drum & bass and dubstep, genres of music that one could label as ‘black sound’, are almost absent. To the contrary, forms of expression and languages of traditionally white musical scenes are unproblematically absorbed. One may think, e.g., of the female artists group Chicks on Speed, which situates itself within the Riot Girlz tradition, or of Daniel Richter’s painterly punk attitudes, or of the ‘Deutsche Welle’ kitsch in the work of Jonathan Meese. Looking at art, which relates to the tradition of the afro-atlantic diaspora, the contemporary continental European art scene seems to remain speechless, lacking an adequate vocabulary and above all a cultural relationship. To understand a beat as a complex form of avant-garde, as in the Harlem Renaissance of the twenties, with the discovery of syncopated swing rhythms, seems to be quite impossible within the context of the ‘white cube’, which today remains the hegemonic type of art space. Even if its walls get another color, even if the ‘white cube’ doesn’t have the form of a cube and is transformed into an ‘alternative space’, chances are high that the ‘white cube’, understood as the art space, the space in which contemporary art is shown, ‘sounds’ white.

Black Sound White Cube by the Belgian philosopher Dieter Lesage and the German artist and curator Ina Wudtke sheds a new light on global intricacies within contemporary art production and comments on works by international artists, such as Sonia Boyce, Jennie C. Jones, Minouk Lim, Nadine Robinson, Sanford Biggers and Yoel Vazquez, as well as by curators, such as Thelma Golden, Valerie Cassel Oliver, Lydia Yee, Richard J. Powell and Franklin Sirmans, who in their artistic and curatorial work reflect on the afro-atlantic diaspora and explore the relationships between music and the visual arts. Black Sound White Cube also offers a refreshing critical reading of canonical works of art, which in this context are uncritically mentioned over and over again, such as 4’33” by John Cage, and Rock My Religion by Dan Graham. At once courteously and polemically, Ina Wudtke and Dieter Lesage indicate subaltern lines of tradition and provoke a discussion beyond the hegemonic traditions of avantgarde and rock. 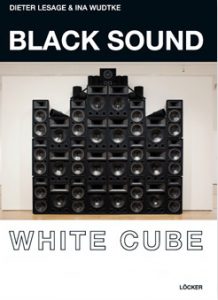