Logics of Space and Montage #2

For Angela MELITOPOULOS, the experience of migration generates the forms of thought and action only simulated by interdependent news broadcasters and stock photo agencies: the nonlinearity of montage. This event featured a screening of Melitopoulos’ key works, followed by comments and a discussion with Rainer BELLENBAUM.

Angela MELITOPOULOS is professor of the School of Media Arts at the Royal Danish Academy of Fine Arts in Copenhagen. Her videos, installations and sound pieces focus on memory, time, political geographies, migration and mobility. Together with her long-term colleague Maurizio Lazzarato, Melitopoulos produced works such as Assemblages (2010-12) that analysed Félix Guattaris’ term of an machinic Animismus. In 2017 she produced the four-channel video installation Crossings for the documenta 14 – a cooperation with Lazzarato and Angela Anderson who has been occupied with the current crisis in Greece. Together with Angela Anderson, Melitopoulos produced the two-channel video installations Unearthing Disaster I und II (2013 and 2015) which was the result of a long-term research about the impact of gold mining in Northeastern Greece. 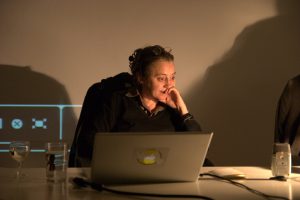 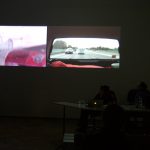 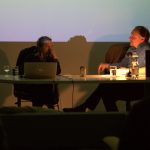