In the framework of her cross-disciplinary research project Ethical and Aesthetical Protocols of Apology, Suzana Milevska invites several artists, theorists, and researchers in different disciplines and fields of study for a series of public talks and written conversations. Milevska and her guests will address pressing questions regarding systemic and institutional politics of apology, ethical protocols that form an indispensable precondition for any successful apology, and various artistic and aesthetical strategies that deal with apology in different contexts and forms.

Milevska’s project focuses on the potentialities and limitations of various socio-political and artistic protocols of apology in order to draw “apologoscapes” and “memoryscapes” of decolonization and counter-patriarchy. This particular phase of the project investigates various cultural and socio-political phenomena that put apology discourses in relation to the spatialization of objects, bodies, and memories. More precisely, it looks at theoretical and artistic research strategies and case studies that involve the discourse and materiality of apology while aiming to decolonize collective memory, reconciliation, and other forms of social, systemic, and institutional transformation.

This talk traces aesthetics of settler colonialism and political apology in and around the Truth and Reconciliation Commission of Canada. In the space known as Canada, ongoing colonial violence is hushed by a national identity of benevolence, caught between its ongoing colonial project and its politics of recognition, apology, and reconciliation. Meanwhile, Indigenous reclamation work explicitly challenges the logics and worldviews of settler colonialism through amending, overwriting, and refusing colonial narratives and expressions of ownership. The concept of ‘reconciliation’ itself is embedded with colonial ideologies and parameters, which have been and continue to be challenged by Indigenous ontologies and epistemologies. Under these politics of apology, institutional recognition, support, and appropriation of decolonial sentiments can serve as an anaesthetic. However, they also leave openings, and the Canadian state’s adherence to the (colonial) rule of law creates illuminating disputes over land jurisdiction.

This talk will analyze the political landscape and lawscape through the images of colonial narratives presented in the Canadian passport, landscape aesthetics such as the alteration of the Okanagan Valley grasslands, colonial uses of Indigenous art and material culture such as the spectacularization of totem poles, linguistics of reconciliation, and decolonial spatial and narrative reclamation and amendment through art and aesthetic action. It will point to the cracks in colonial physical and narrative structures and what is growing there.

Seraphine APPEL is a doctoral researcher in philosophy at Pompeu Fabra University, Barcelona. Currently, she is working on analyses of the effects of spatial aesthetics on temporality and time experience. Her research relates aesthetics to decolonial theory and explores how colonial projects and attitudes shape ambiances and structures of feeling through physical and narrative manipulations of space and time. A Canadian of European parents, her perspective is that of a settler when speaking on these topics, and her philosophical project is a deconstruction of settler-colonial attitudes, rooted in the investigation of an aesthetic topology of spaces and understandings of time and history. Seraphine Appel currently lives in Paris. 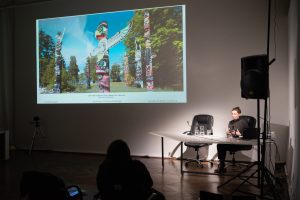 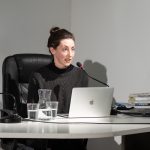 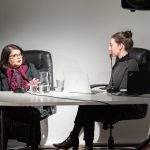