Seeing Through the Affects of Violence. Part 1

In a number of works realized within the last six years, Mykola RIDNYI addresses the question of vision in the context of reality affected by war. How to talk about violence without reproducing it and how not to lose compassion in a flow of sensational news and shocking content? Ridnyi borrows the visual language of ophthalmology and uses the metaphor of blindness to describe the dehumanization of society. In the context of his research for the project Fear Has 100 Eyes during the fellowship at Künstlerhaus Büchsenhausen, the artist invited Sezgin BOYNIK, theoretician and editor-in-chief of the Rab-Rab Press in Helsinki, and Daniel MUZYCZUK, curator and Head of the Modern Art Department at Muzeum Sztuki in Łódź, to talk about alternative ways of seeing and reflecting in the context of current global conflicts and their historical perspectives.

In his talk Blind Spots of Violence*, Sezgin Boynik will talk about his ongoing research on the political implications of experimental film forms. By focusing on the Structuralist-Materialist radical critique of representation, he will emphasize the relevance of these mid-seventies debates for understanding our contemporary situation. Engaging with the work of Lis Rhodes, Boynik will discuss in what way the critique of representation and narrative is related to that of violence and force.

Daniel Muzyczuk will analyze the methodology of work by the Polish artist and theoretician Władysław Strzemiński. During WWII, Strzemiński made a few series of drawings that reflected the experience of being a witness of violence. While the line was still rooted in the organic shapes he utilized in his earlier unistic compositions, these drawings were figurative and evoked dramatic events. His talk Mindful Eye. Władysław Strzemiński and the Traces of Violence will position them in relation to the theories of the artist and his ideas about a dynamic understanding of realism and visual consciousness.

PLEASE NOTE: If you would like to directly participate in the discussion, please register via Eventbrite. You will receive the Zoom link automatically. Otherwise you will be able to follow the event on Facebook.

The event is part of the Büchsenhausen Focus Weeks 2021. More events organized by the Fellows 2020-21 will follow in the course of the next few weeks.

Mykola RIDNYI is an artist, filmmaker and essayist based in Kyiv, Ukraine. He works across media, ranging from early political actions in public space to the fusion of site-specific installations, photography and the moving image which constitute the current focus of his practice. In recent films he experiments with nonlinear montage, and a collage of documentary and fiction. His way of reflecting social and political reality draws on the contrast between fragility and resilience of individual stories and collective histories. A connection with alternative times and phenomena, the influence of the past to the present and future, and the pressing polemic of manipulating historical memory born out of contemporary political agendas are among the main issues revealed in his engagements, initiatives, and projects.

Ridnyi has been a founding member of the SOSka group – an art collective originated from Kharkiv, Ukraine. He is a contributing editor of Prostory, an online magazine about art and society. His works has been exhibited in Venice biennale for contemporary art, The School of Kyiv – Kyiv biennale, Pinakothek der Moderne in Munich, daad galerie in Berlin, Transmediale in Berlin, Zentrum fur Kunst und Media in Karlsruhe, Galerie fur Zeitgenossische Kunst in Leipzig, Museum of Modern Art in Warsaw, Bonniers konsthall in Stockholm and others. He has been a scholar of Akademie der Kunst in Berlin, Iaspis in Stockholm, Gaude Polonia in Krakow and others.
http://www.mykolaridnyi.com/

Sezgin BOYNIK is a theoretician based in Helsinki. He completed his PhD on Yugoslav “Black Wave” cinema. He co-edited Nationalism and Contemporary Art: Critical Reader (MM & Exit, 2007), History of Punk and Underground in Turkey (BAS, 2008), Noise After Babel: Language Unrestrained (Spector Books, 2015, with Minna Henriksson). Recent publications include In the Belly of the Beast: Art & Language New York Project (Rab-Rab Journal Vol. 4, No. 2, 2017, with Michael Corris), Coiled Verbal Spring: Devices of Lenin’s Language (Rab-Rab Press, 2018), Free Jazz Communism (Rab-Rab Press, 2020), Sickle of Syntax & Hammer of Tautology: Concrete and Visual Poetry in Yugoslavia, 1968 – 1983 (OEI Press, 2021). He is currently working on a project of translating Ilya Zdanevich’s ‘zaum’ play Yanko, Krul Albanskaya, and on the translation of Karel Teige’s book Art Market, to be published in collaboration with Contradictions Journal based in Prague. He is the founder and editor-in-chief of Rab-Rab Press in Helsinki (www.rabrab.fi). Sezgin Boynik was Büchsenhausen Fellow in 2013-14. 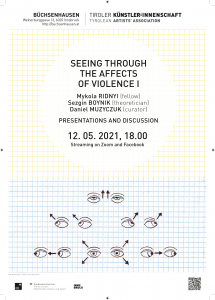