The Past is an Arrow into the Future

Michael Baers will present his work in progress, The Past is an Arrow into the Future, featuring invited actress Caroline Richards and followed by a discussion about topics as the role of fiction in art as well as historical fiction itself.

Set in the spring of 1933, around the time of the regional elections and public unrest that followed, The Past is an Arrow tells the story of A, a British woman who is visiting Innsbruck for reasons that are not altogether clear to her. Written as a diary, the work is an attempting to understand what it would be like to be present somewhere at a time when everything changes for the worse. In this, it is referencing contemporary experience—the despair that has followed national elections across Europe, Asia and the Americas.

The event takes place in the context of the artistic investigation The Past is an Arrow into the Future by Michael BAERS and will be held in English.

Caroline RICHARDS is a British actress and director. She studied English Literature and Theater Arts at the University of Edinburgh, and in Paris at the Ecole internationale de Théâtre Jacques Lecoq that laid the foundation for her theatrical work.

She came to Austria in 1991, learned German and started as an actress in the independent scene, including engagements at the Salzburger State Theater, Theater Vorarlberg, Komödienspiele Porcia, City Theater Mödling among others. Between 2001-2004 she was honorary member at the State Theater of Lower Austria.

In 2000 she founded the children-youth Theater Taka-Tuka, and since 2007 has been part of the management team of the kleinestheater.haus der freien Szene in Salzburg. Since 2003 she has staged over 50 plays at the Schauspielhaus Salzburg, Next Liberty in Graz, Theater des Kindes in Linz, Innsbrucker Keller Theater, Salzburger Adventsingen at the Festspielhaus, State Theater Lower Austria.

Her productions have been rewarded by the BMukk, and in 2010 she received the Kulturförderpreis from the city Salzburg for her theater work for and with chidlren and adolescents 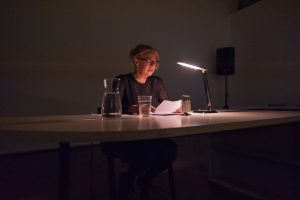