The AGM Annual General Meeting and Künstlerhaus Büchsenhausen presented the 5th edition of the AGM 07 Annual General Meeting. The platform introduced and discussed both art projects created using journalistic and documentary means and journalistic investigations that employ artistic platforms to reach the public.
The AGM 07 Doc.Art symposium focused on topics including aesthetic journalism, the use of realism in documentary video art and artistic/journalistic exposing of territorial control.

AGM was founded by Alfredo Cramerotti and Iben Bentzen in 2003 in order to pursue new modes of knowledge production in existing fields of knowledge. It is an annual and itinerant event focused on exploring the relationship between the annual theme and the hosting institution.
www.agmculture.org

Francesca RECCHIA (*1975) is a Research Fellow at the University College of London. Her work deals with the geo-political dimension of cultural processes. She holds a PhD in Cultural Studies (Oriental Institute Naples) and an MA in Visual Cultures (Goldsmiths College London). She was part of the public outreach project at documenta 11. She has lectured internationally and collaborated with the artist groups Multiplicity and Stalker/Osservatorio Nomade.

Iben BENTZEN (*1977) is a curator, critic and artist based in Copenhagen. She holds an MA in Art History and Visual Culture (Copenhagen University). Iben Bentzen’s work explores the existing modes of perception regarding cultural identity, realities created by media and otherness. She has produced experimental television for the Chamber of Public Secrets at tv-tv.dk and worked as a moderator for the net-gallery Netfilmmakers.dk. 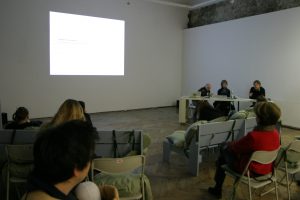