Within the context of the exhibition Liberation//Libération, Jochen BECKER screened and commented on the film Indigènes on the premises of the Innsbruck Social Service (ISD) next to youth center Z6.

The feature film Indigènes (en.: Days of Glory, 2006), from Algerian director Rachid Bouchareb, shows the winter campaign of North African soldiers in Europe. The liberation of Europe was won not least by soldiers from the colonial regions. Even today, these veterans struggle to receive compensation equal to that of their French-born co-combatants. The audience consisted largly of North African youth who the media and politicians criminalized as the so-called “Moroccan scene”. One intention of the event, which a social worker interpreted live into Arabic, was to raise consciousness about a certain “history of migration” of people from North African regions to Tyrol: North African soldiers from the French Army were the first to march in and liberate Tyrol at the end of the Second World War.

The event was held in cooperation with the Youth Welfare Office Tyrol. 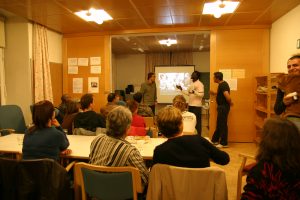 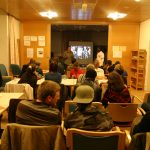