In his artistic work Stephan PIRKER develops sound objects, for example, which are generally presented in a context of performance. His starting point here is a close affinity to nature and winter sports.
In 2006/7, at the University of Lapland – Art, Rovaniemi/ FIN, he fulfilled a long-entertained childhood dream by learning the art of ski-jumping. Ski-jumping with all its facets is a continuing theme in Pirker’s work.
In several years of cooperation with the group of artists bu’nostik (2004-08), a number of so-called hightrash sound objects have been developed – assembled into compositions, sequenced, and presented in the form of performance.

Stephan PIRKER was born in Innsbruck on 23.12.1971; after graduating from a school with a mechanical engineering bias (1990) and training as a care assistant (1999), he studied Sculpture and Transmedial Space (2002-09) and also Experimental Design (2009-13) at the University of Art and Design, Linz.
He graduated with a Diploma in Fine Art (2013), with the work jumping sound system 013 / js-sys 013 in the context of the Festival of the Regions.
His main emphasis during his studies included the development of the work ssp 04 – the singing skeleton Pilot 04 (Ars Electronica 2005), as well as various sound objects and performances incl. in the artists’ collective bu’nostik.
For 13 years now, his summers have been spent in his favourite job as a herdsman on the slopes of the Alps. 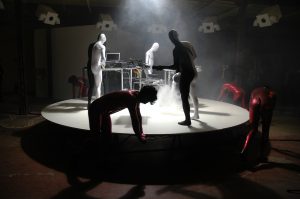