Jochen BECKER held a film commentary and screening as part of the exhibition opening for Liberation//Libération at Künstlerhaus Büchsen-hausen. The presentation centered around the film 1. April 2000 by Austrian filmmaker Wolfgang Liebeneiner.

According to the credits, this prestigious, star-studded Austrian film “was developed with the generous support of state and church authorities, as well as the broadest possible participation from the people of Austria”. The feature film was produced in 1952, when Austria was still under Allied control. In it, director Wolfgang Liebeneiner imagines the end of the Allied occupation—but only in the distant future. Three years later, on May 15, 1955, Austria’s occupied status was declared over with the signing of the Austrian constitution.

Yet this plays out differently in the film: the country is brought before the World Protection Commission International Court. It is declared that Austria will be dissolved, the population relocated to the Sahara and the territory turned into a natural wildlife reserve with a museum landscape for tourists. The film alludes to the UN and Nuremburg Trials, but also presages the International Court of Justice at the Hague or South Africa’s Truth and Reconciliation Commission, hinting at new forms of global politics to come. The Austrians want to prove that they are a gentle people. As a defense, the Minister President conjures up old film material with the push of a button. Fascism is entirely erased from the retouched history seen in the material. The head of state hires theatre actors to play historical Austrians such as Prince Eugene, Maria Theresa and Sissi. They stage a re-enactment of Austrian history using an elaborate set and props from museum collections. Austria presents itself as a harmless Cultural Nation. The real victims’ perspective is missing in the Eurocentric defense-clips and scenes. The culture-loving country appears in the film as the actual victim, one that also saved “Europe” from the Turkish invasion.

Just a few years prior to the film’s release, the director Wolfgang Liebeneiner had been an important cinema functionary in the Third Reich. In his journal, Goebbels characterized him as “young, modern, ambitious and fanatical”. In 1941, he directed the film Ich klage an (en.: I Accuse) in close collaboration with the Nazi propaganda ministry. The film is considered a “euthanasia film”, intended to justify the murder of patients under Aktion T4.
Jochen Becker 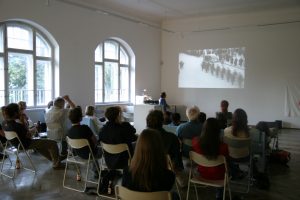 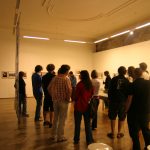 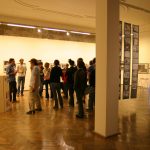 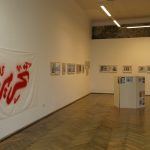