Fact, Facticity and the Imagination

Raqs Media Collective’s practice has its origins in documentary film: though the group has come a long way from the empiricist imperative of mainstream documentary filmmaking, they have an enduring fascination with documents and other forms that point to the theoretically “real”.

Raqs’ interest in documents stems from the rhetorical spaces that can break open when handling documents. The same is true for the elaborate disguises and ruses that are sometimes inherent to the rhetoric of documents.

Raqs’ work has occasionally investigated these folds and fissures in the documentary mode to create correspondences between fact, facticity (the appearance of something as factual) and the imagination. In their talk, Raqs rehearsed an itinerary through this disputed territory, which is contentiously and simultaneously claimed by reality and some of its close relations. 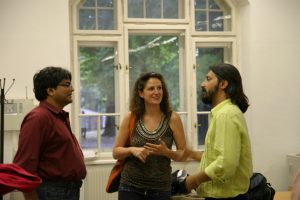