How to Revolutionize Art. Collective Practice and Political Organization of Artists in the Interwar Period in Yugoslavia

In the context of their artistic investigation into the partisan culture in Yugoslavia titled Lessons in Defense, the KURS collective will host two guests who are researching about progressive artistic groups from Zagreb and Belgrade form 1930’s that influenced the partisan culture during World War II. After an introduction by KURS (Miloš Miletić and Mirjana Radovanović), Vida KNEŽEVIĆ (art historian) and Vesna VUKOVIĆ (curator) will talk about the illegal group Život (Life) respectively and the Zemlja Artists‘ Association.

The Yugoslav illegal group Život (Life). The question of political organizing of artists

The subject of the presentation is an examination of the theory and practice of the critical Left in Yugoslav culture. This examination will evolve by deliberating the complex relations of critical art practices during the interwar period as well as the political practices of the collective body of revolutionary social movements. The case study focuses on the illegal group Život (1934 – 1940) which emerged in times of state repression and censorship as a heterogeneous art group with pluralistic stands on the question of aesthetics, and organized around the idea of art as social practice that advocates a class struggle using artistic and political means. The group’s everyday artistic and political practice can give us a historic example of how we could think of today’s relations of artistic content and form, the notion of collective art, and the question of political organizing of artists.

The Art of the Collective – The Case Zemlja

Vesna Vuković will present the collective research “The Art of the Collective – The Case Zemlja” (2016 – 2019) which was done by BLOK (Political School for Artists) and dealt with the Zemlja Artists’ Association (1929 – 1935), a socially engaged group of painters, sculptors, architects, workers, and peasants artists, one of the first examples of self-organized programmatic gathering of artists in Yugoslavia. Through a collective artistic endeavor, the group dissected the broader sociopolitical context of the interwar period. The historicization of “Case Zemlja” has raised an issue neglected by the existing narratives: the relationships between the members of the association and the social movements of that time. BLOK’s research took a closer look into how the artists understood the social function of their practice, and how the heteronomous critique of the autonomy of art resonated within the Association itself and the artistic field at large. Although almost an entire century separates BLOK from the Zemlja’s collective work, the group believes that the search for the answer to the questions of what is leftist art, how art is collectively created and how this art affects the collective’s members, are still relevant today.

The presentations will be held in English.

Mirjana RADOVANOVIĆ and Miloš MILETIĆ jointly practice visual art and research as KURS. In their work they explore how artistic practice can contribute to — and become an integral part of — various social movements. They often use archival material as a starting point, in combination with revolutionary poetry and prose and the visual language of progressive movements from the past. Most often they produce murals, illustrations and various printed materials including newspapers, posters, graphics. They are guided by the idea that the content they produce should be didactic and accessible to the wider public.

Projects that KURS realized in recent years are, among others: the research Lessons on Defense conducted in 2016 and 2017 on cultural activity within the People’s Liberation Movement; the mural Solidarity—to the International Brigades in Belgrade, dedicated to the 80th anniversary of the establishment of the International Brigades; the mural Struggle, Knowledge, Equality in Belgrade, on the occasion of the Students’ Day; the mural 20th October on the occasion of the 70th anniversary of the liberation of Belgrade; the mural Factory to the Workers at the Itas-Prvomajska factory in Ivanec, Croatia as part of the 13th Urban Festival; a residency in Chile at the AIR Casa Poli; the participation in the Persona Non Grata program in Ankara, organized by the AsiKeçi Collective; and the mural What Do We Know About Solidarity during the Qalandiya Biennial 2018 in Palestine.

As part of the Fellowship Program for Art and Theory 2019-20 at Künstlerhaus Büchsenhausen in Innsbruck, KURS published the book Lessons on Defense: Cultural Activities of the People’s Liberation Movement (2020).

Vida KNEŽEVIĆ is an art historian, curator, cultural worker, and member of Kontekst collective. Her work is based on a process of connecting critical theory and practice, and the field of arts and culture with wider social and political effects. From 2006 to 2010, she worked on the Kontekst Gallery project. From 2008 until 2010 she taught at the Advanced Vocational Studies School of Fine and Applied Arts in Belgrade. Since 2014 Vida is co-editor of the media portal Masina.rs that deals with the production of social critique. Recently she finished her PhD thesis on the question of theory and practices of the critical Left in the Yugoslav culture in the interwar period.

Vesna VUKOVIĆ is a curator, critic and researcher in the field of socially engaged art, member of curatorial collective BLOK, translator and publisher. She runs programs at the BAZA art center and educational programs organized by BLOK (Political school for Artists). Vesna taught at the Academy of Fine Arts in Zagreb (2007–11) and at the Arts Academy in Split (2012–13). In 2013 she was a resident-researcher at the Akademie Schloss Solitude in Stuttgart. She publishes essays in periodicals from Croatia and abroad (Frakcija, Theory that Walks, Camera Austria), and reviews and critiques for the web magazine Bilten, Le Monde Diplomatique and the Third Program of the Croatian Radio (Triptih, Ogledi i rasprave) where she is one of the editors of the show Stvarnost prostora. As an author, Vesna has written introductions to the artistic monographs of Sanja Iveković and Bojan Mrđenović, and has edited several publications in the field of contemporary art. Together with Ana Kutleša and Ivana Haanček she has been awarded by the Hans und Lea Stiftung in 2019 for the research of Zemlja Artists’ Association (1929 – 1935) in the category art history/mediation. 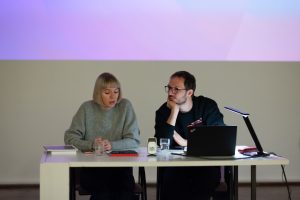 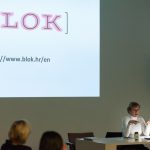 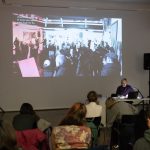 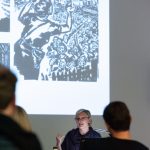 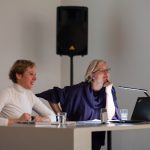