Accompanying their joint contribution in the exhibition A part that is missing never breaks belit sağ and Aşkın Ercan will hold a live broadcast on censorship and victimizing language on Friday 25 May, 2018 from 19.00-20.00 on Radio Freirad. The broadcast will be streamed on the internet.

Aşkın Ercan is a video maker and painter who lives and works in Turkey. Her recent paintings focus on urban life, humanity and memory through portraying humans who are lost and sometimes visible in urban life. Her recent videos are performance-based and often experimental. Her most recent solo show is The Girl on the Wire, TAC Gallery, Tusla/Oklahoma, USA 2018. Her recent group shows include The Settlement of Time, 27th İstanbul Art Fair, 2017; and Crossing Borders, Living Art Tulsa, USA, 2017. Currently she is a PhD candidate at the Gazi University, Department of Fine Arts in Ankara, Turkey. 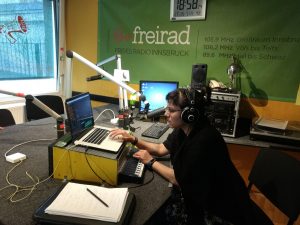