Angela Anderson screens her – together with Angela Melitopoulos produced – two-channel films Unearthing Disaster I and II (2013 and 2015). The works present results of a long-term research about the destruction of Halkidiki in Northeastern Greece. The artists began documenting the environmental, social and psychological damage inflicted on the region by the construction of a massive open pit gold mine by the Canadian mining company Eldorado Gold.

Unearthing Disaster I (2013, 36min) accompanies local activists on a journey through their once-familiar landscape, transformed in a matter of days by the anti-productive forces of capitalism into something they no longer recognize. Through the course of this journey, the scale of the imminent disaster unfolds through stories about millions of trees cut, clean water which is disappearing from the mountain and the sell-out of the region by local politician. The violent repression of the social movement formed to prevent the destruction of the natural environment by the police and private security, as well as the encounters with workers who violently defend the short-sighted nature of their employment will be documented.

Unearthing Disaster II (2015, 26min) develops a poetic point of view on matters which are in the course of this violent conflict endangered. It contrasts the molecular, intelligent, rhizomatic networks of plants, trees, streams, and earth with the massive, violent, mechanized destruction of these networks in the name of profit and “development”.

You are invited to an open discussion with film maker Angela Anderson after the screening.

Angela MELITOPOULOS is professor of the School of Media Arts at the Royal Danish Academy of Fine Arts in Copenhagen. Her videos, installations and sound pieces focus on memory, time, political geographies, migration and mobility. Together with her long-term colleague Maurizio Lazzarato, Melitopoulos produced works such as Assemblages (2010-12) that analysed Félix Guattaris’ term of an machinic Animismus. In 2017 she produced the four-channel video installation Crossings for the documenta 14 – a cooperation with Lazzarato and Angela Anderson who has been occupied with the current crisis in Greece. Together with Angela Anderson, Melitopoulos produced the two-channel video installations Unearthing Disaster I und II (2013 and 2015) which was the result of a long-term research about the impact of gold mining in Northeastern Greece. 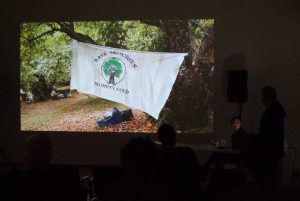 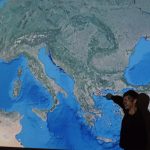 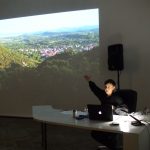 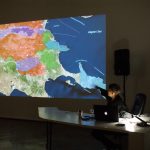