Admission: free / donations will go to Office Ukraine and the bereaved family of the director Mantas Kvedaravičius

The event addresses continuities and ruptures in the recent history of Ukraine and, by taking Mariupol as an example, attempts to make the local audience more familiar with the country where the dramatic images of war that we see in the news on a daily basis come from. The two selected documentary films take the currently heavily contested city of Mariupol in eastern Ukraine as a starting point to reflect on the omnipresence of the armed conflict that has already been going on for several years and the personal fates shaped by war and its consequences.

Before the screening, Iryna KURHANSKA, curator and art manager from Kyiv and since April 2022 member of Office Ukraine – Shelter for Ukrainian Artists in Innsbruck, will talk with Mariupol-born documentary filmmaker Zoya LAKTIONOVA about the current situation in Ukraine and the possibilities and limits of making film about, during and despite war.

Laktionova will then present her short documentary film Territory of Empty Windows (2020). Based on an interview with her mother, the film provides insights into the lives of those people who, for lack of alternatives, remain in the shelled city and try to defy the consequences of war and environmental pollution. Following the short film, we will see the powerful documentary Mariupolis (2016) by the Lithuanian director Mantas Kvedaravičius, who was killed on 2 April 2022, while trying to shoot again in Mariupol. Instead of focusing on violence, the film documents the everyday life of a city whose inhabitants try to continue their daily routine despite bomb threats and the sound of shelling.

After the screening, we invite you to engage in conversations with the organizers and the guest, to ask questions, to exchange ideas, and to network. The resulting encounters might become starting points for future discussions and collaborations.

Office Ukraine. Shelter for Ukrainian Artists has been set up for Ukrainian artists and cultural workers in all disciplines fleeing war in Ukraine and seeking shelter in Austria. The platform coordinates a variety of civil society and institutional initiatives and connects institutions and individuals based in Austria and cultural workers from Ukraine.
www.artistshelp-ukraine.at

Zoya Laktionova, Territory of Empty Windows | Територія пустих вікон, 2020, 10 min. OV with English subtitles. In the presence of the filmmaker.

Iryna KURHANSKA was born in Kyiv in 1995. She studied Literature and Cultural Studies at Kyiv-Mohyla Academy. She worked as a curator assistant for YaGallery Art Center (Kyiv, Ukraine), which focuses on contemporary Ukrainian art. She was involved in creating a permanent exposition of the state museum dedicated to the Soviet occupation of Ukraine (National Museum of the Holodomor-Genocide) as a researcher and curator. Since April 2022, Iryna has been working for Office Ukraine Innsbruck.

Zoya LAKTIONOVA was born in 1984 in Mariupol in a working class family. Zoya first appeared in the world of documentary cinema as a character in the film Ma (10’) in 2017; one year later she made her first short documentary Diorama (12’) about the mined sea at the Mariupol area. The film won an award in the MyStreetFilms category at the “86” festival (Ukraine) in 2018, has been shown at numerous European film festivals (DOKLeipzig, Ji.Hlava, Cottbus etc.), and was released in cinemas in Ukraine in 2019. In 2021, Zoya premiered her new short Territory of Empty Windows (10’) at DocuDays UA (International Human Rights Documentary Film Festival), and showed it in cinemas at Molodist IFF in Kyiv, received a special award from the Ji.Hlava Festival at the Obirok 2021 Festival, and the main award at the documentary competition of the French-Ukrainian Festival MIST 2021. Before the start of the full-scale war of Russia against Ukraine (24/02/22), Zoya lived in Kyiv and worked as an independent artist and documentary filmmaker. In her films, she touches on issues of war, memory, and personal stories.
www.zoyalaktionova.com 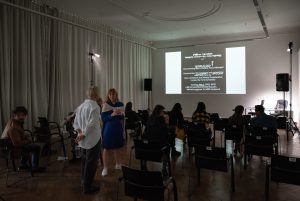 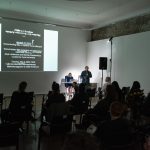 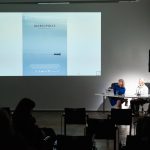 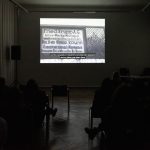 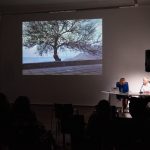