Art and the Capitalist Economy of Desire was the title and topic of Jan Sieber’s theoretical project proposal during his fellowship at Künstlerhaus Büchsenhausen. Tragically Jan Sieber passed away on 22. May, three days before his 36. birthday, as a result of a brief but severe illness.

In his work project for Büchsenhausen, Jan Sieber was interested in how the libidinous economy of desire in capitalism, as well as questions of subjectivity and identity, are echoed, reflected and criticized in contemporary art.

„Capitalist society does not just suppress and repress human desire, so that its liberation develops a subversive character per se. Nor does it simply utilize human desire – in alienated form – as a kind of natural resource. Instead, capitalism actually generates this desire as something specific, i.e. as a desire that bolsters the capitalist utilization context, and at the same time as a desire whose negativity should be suppressed and distorted. This structural antagonism brings together the psychoanalytical theory of unconscious desire (Freud and Lacan) and Marx’s analysis of the workforce as a commodity. This becomes obvious, for example, in an increasing commodification of identities (gender, sex, origins, class, political orientation, religion, taste and more). […]

In art, desire becomes a moment by which, as Adorno argues, work, as a productive force in Marx’s sense, gets objectified. Accordingly, art always deals also with what it signifies to be a desiring subject under the conditions of the capitalist mode of production. Understanding art as a show-place of the antagonistic structure of desire, however, should not mean that artworks are reduced to subjective sign systems of the individual that produces them; art must not be romanticized as an outlet for his/her psychological suffering and a means toward his or her adaptation to social reality. Equally wrong is also the vitalist fantasy of the liberation of a quasi-natural force of desire through art. Far more, art’s objectivity lies in its expression of the contradictions of capitalist modes of production concentrated in desire, respectively in the work force. It has critical potential wherever it creates space for the negativity of desire and foils the distorted fantasies of fulfilled desire untouched by capital. The measure of such criticism formulated in art would not be developing a specific awareness of something but an expression of the subject’s negativity and the disclosure of affirmative positivizations of subjectivity as a zone liberated from the contradictions of the capitalist modes of production.“

Starting out from such observations and by referring to psychoanalysis and critical theory, Sieber’s project intended to aks how contemporary artistic practices thematize the problems of subjectivity, desire and identity, how they suggest forms of subjectivation that do not simply renounce desire but propose queer or other non-identity-related ways of rescue it. How can art stage or promote subjectivation without merely repeating or working towards the production of capitalist subjectivity? How can art be understood as criticism of the capitalist economy of desire?

In the context of Büchsenhausen’s first Focus Weeks 2019, the event continues with and extends Jan’s formulated ideas and questions of his working-project. The participants of the panel discussion are theorists whom Jan Sieber intended to invite to a panel discussion in early summer 2018. Each participant will give a keynote speech of 15 min., followed by a discussion. The audience is welcomed to participate.

Helmut DRAXLER: Sex and the Symbolic. Possibilities and Limitations of an Aesthetics of the Real
Jenny NACHTIGALL: Notes on the Aesthetics of a Fractured Vitalism
Kerstin STAKEMEIER: Love Without Work: On Decapitailisations of Desires
Samo TOMŠIČ: The Capitalist Enjoyment and the End of the World

Jan SIEBER (1982 – 2018) studied cultural sciences, philosophy and art theory at the University of Bremen, Leuphana University Lüneburg, and at Middlesex University London. Between 2011 and 2017 he worked as an academic associate at Berlin University of the Arts, where he completed his doctoral thesis in the field of Aesthetic Theory. The emphases of his research lie in Aesthetics, Psychoanalysis, Critical Theory, Cultural Theory, and contemporary French Philosophy.
Following a brief but serious illness Jan Sieber died on 22 May 2018.

Helmut DRAXLER is an art historian und theorist. He is head of the art theory section at the department of science of art, art education and communication of art at the University of Applied Arts Vienna. He is publishing regularly on theory and practice of contemporary art. Current research focuses are the philosophy of Flemish paintings and a cultural theory of division.

Jenny NACHTIGALL teaches at the department of philosophy and aesthetic theories at the Akademie der Künste München. In 2016 she received her degree with her dissertation Beyond Modernism. Form as Contradiction in Berlin Dada at the University College London. Currently she is working on the survival of vitalism in modern and contemporary art and theory. Recently published: Realism after Fetishism (2018 hrsg. v. Veronika Thanner, Joseph Vogl, Dorothea Walzer). She writes amongst others for Texte zur Kunst (Engl. Texts for Art) and Artforum.

Kerstin STAKEMEIER is professor for art theory and art communication at the Akademie der Bildenden Künste Nuremberg. She studied political science and art history, and focuses in her work on the variable conflicts between these two fields. Kerstin Stakemeier writes amongst others for Texte zur Kunst (Engl.: Texts for art), Springerin and Artforum. She is editor as well as author of multiple books, recently of Entgrenzter Formalismus: Verfahren einer antimodernen Ästhetik (Engl.: Unbounded Formalism: Process of anti-modern Aesthetics) (b_books 2017).

Samo TOMŠIČ received a degree in philosophy at the University Ljubljana, Slovenia, and is currently a research fellow for the interdisciplinary Excellence Cluster Bild Wissen Gestaltung (Engl.: Image Knowledge Form) at the Humboldt University Berlin. His publications inlcude: The Capitalist Unconscious: Marx and Lacan (versobooks, 2015) and The Labour of Enjoyment: Toward a Critique of Libidinal Economy (in Vorbereitung, August Verlag 2019). 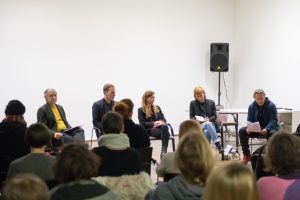 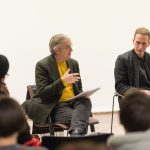 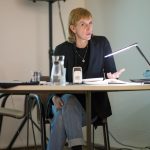 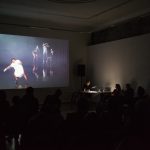 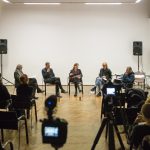 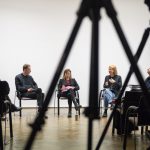