Marianna Christofides: Days In Between

After the presentation at the mumok kino in Vienna in early March 2022, the film Days In Between by Marianna CHRISTOFIDES and the accompanying eponymous book will come to Innsbruck in cooperation with the International Film Festival Innsbruck (IFFI). The film screening and the book presentation will take place on Sunday, 29 May 2022 at 17.40 at Leokino.

In her work, Marianna CHRISTOFIDES addresses juxtapositions of geological and sociohistorical narratives; she is concerned with the (mis)use of the concept of nature as justification for determinist mindsets that attempt to obscure the contingent character of things. The essay film Days In Between reflects the artist’s engagement with border zones and topographies of violence and violation. In a nuanced choreography of audio-visual recalibrations, the work looks at postindustrial landscapes and stereotyped ascriptions of “the Balkans.” The disjunctive ethos of the essay film and its interstitial practice of thinking give voice to the neglected or unthought in thought, the unform in form, providing viewers in aesthetic-affective and, hence, also political ways with possibilities and hope in uncertain times.

The screening in the context of IFFI (International Film Festival Innsbruck) at Leokino will be followed by the launch of the book Days In Between. The book, published in 2021 in the Büchs’n’Books series and in cooperation with Hatje Cantz Verlag, draws on Christofides’ recent solo exhibition at MNAC, Bucharest and gives, for the first time, a profound insight into her diverse aesthetic work and unique artistic practice. It assembles nine critical voices from the arts and academic world. Thinking with new materialism, Deleuzian film theory, and philosophical studies on time and space, the contributors highlight the multiple enfolded ways in which the artist’s work opens up to conversations around landscape and space in postcolonial contexts, essayistic film practice and forms of critical-emancipatory knowledge production in the arts.

Marianna CHRISTOFIDES is an artist working primarily in moving image and text. In her artistic research practice, imprints of slow violence are negotiated in long-term observations and in a material engagement with the spaces under study. Christofides was Büchsenhausen Fellow in 2017-18. 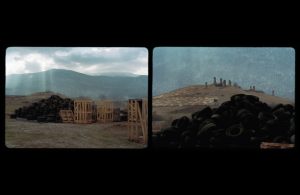