This publication documents Vladislav Shapovalov’s long-term undertaking Image Diplomacy, consisting of a film and a series of installations focused on exhibitions as a political medium. The project narrates the battle waged between two ideological blocs, the USSR and the United States, in the field of “exhibition diplomacy” during the Cold War and gives insight into the unwritten history of Soviet soft power and socialist internationalism. It compares forgotten archival materials left behind in Europe from Soviet photographic “kit” exhibitions and films with the American Family of Man exhibition, on display today at Luxembourg’s Clervaux Castle and included in the UNESCO Register. Interplays between exhibition histories, geopolitics, and art practice are further examined in the contributions by film scholar Alex Fletcher and curator and researcher Gudrun Ratzinger; a conversation between Shapovalov and curator Emanuele Guidi; and an essay by curator and researcher Andrei Siclodi. 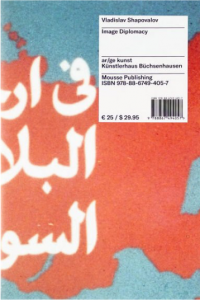